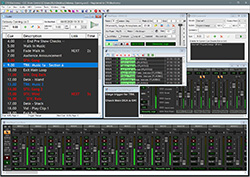 CTR is actively involved in the theatrical and live sound industry providing much needed research into automating and controlling many aspects of the ever increasing complexity of live sound production.

UK-based CTR is the author of award-winning CSC, one of the most powerful sound control software solutions available to todays sound designers and systems engineers. The application is consistently evolving through the research of the real needs of theatrical and live sound designers and exploring new and exciting ways of delivering inspiring audio designs, trouble free, night after night.

Try CSC out now - for free, and see what a difference show control software really can make to your performance.

A city that never sleeps and the hot spot of the Roaring Twenties - arguably the most exciting decade of the 20th century . Berlin is full of contrasts: glamour, luxury and exuberant lust for life on the one hand, unemployment, malnutrition and narrow rental barracks on the other. In clubs, night bars and cabarets you can go through the nights to jazz, swing and Charleston. BERLIN BERLIN throws itself with skin and hair into the wild vortex of a dizzying time, on a seductive sparkling journey through time and experience the sparkling lifestyle of the golden 20s up close! CSC is in charge of sound effects and click tracks, remotely fired via macros from the Digico SD7. https://www.berlinberlin-show.com

To Be a Somebody at Westerberg

Welcome to Westerberg High, where Veronica Sawyer is just another of the nobodies dreaming of a better day. But when she�s unexpectedly taken under the wings of the three beautiful and impossibly cruel Heathers, her dreams of popularity finally start to come true. Until JD turns up, the mysterious teen rebel who teaches her that it might kill to be a nobody, but it�s murder being a somebody... Playing in Londons West End at the Haymarket after a transfer from The Other Palace, and due for UK tour later this year, CSC is heavily involved in keeping the show together, a dual system running sound effects, click tracks, distributing SMPTE and firing MSC to lighting. https://heathersthemusical.com/

Who Will Inherit the family Jewels?

Twenty years after the death of Mr. West, his descendants gather at a remote mansion to learn who will inherit his vast wealth and the hidden family jewels. When the heir is revealed, the heritage hunters turn into prey and a chain of macabre events is set in motion. Will the heirs dare to face the haunting presence toying with them? Observing from the wings, a dual CSC system takes care of all things sound, fully programmed for a DSM operated show with MIDI cues for reverb and mic changes on the QL1 as well as sending MSC to keep the lightning and thunder perfectly in sync for the ultimate suspense. https://www.kenwright.com/portfolio/the-cat-and-the-canary/

...And a 'fete' worse than death. In the long-since 'grand' ballroom of the local Swan Hotel, a most miscellaneous assemblage gather to conduct the business of the Pendon Folk Festival, led by excitable chairman Ray. Unfortunately, for Ray, his calamitous committee quickly divides, as his wife Helen has a bone to pick. Add a Marxist schoolteacher, a military dog-breeder and an octogenarian secretary, and the table is set for one of comedy master Ayckbourn's most hilarious plays - a tumultuous comedy by committee. A dual switching CSC is onboard for the ride providing sound effects to complement the action. https://www.kenwright.com/portfolio/ten-times-table/

Rare Vinyl and The Girlfriend

Rob is the thirty-something owner of a London record shop who�s mastered the art of finding rare vinyl and losing girlfriends. Laura just dumped him, and Rob is totally moving on. Hopefully. Well, there�s a chance it could still work out! Could Laura actually be �the one?� Might this turn out to be one of the Top 5 Most Romantic Comebacks Ever?! Running for a limited time at the newly opened Turbine theatre under the arches in London's Battersea, a dual CSC system is running next to a Digico SD10 providing all things playback. https://www.theturbinetheatre.com/whats-on/High-Fidelity

The Physician Comes to Madrid

Inspired by the famous novel "The Physician" by Noah Gordon, El Medico allows the audience to experience Rob J's adventure from a dark London in the 11th century, crossing the continent to become a physician whos life changes when he finds out he has the extraordinary gift of predicting people death. Staged in the Teatro Nuevo Apolo in the heart of Madrid, Robs journey is brought to life in an epic show with 33 actors accompanied by the biggest theatre orchestra in Spain. Based around an Avid Venue mixing console with D&B PA, a dual CSC system is in charge of click, sound effects and MIDI duties. Sound design by Olly Steel for Orbital. https://elmedicomusical.com/en/

Starring the late Patrick Swayze, Demi Moore and Whoopi Goldberg, the movie Ghost was the highest grossing film of 1990 and won an Oscar for screenwriter Bruce Joel Rubin who has adpated his screenplay for a stage version. Following the same story as the iconic movie, the musical features the Righteous Brothers' Unchained Melody alongside many terrific songs co-written by Eurythmics' Dave Stewart. With detailed and textured atmospheres, sound design by Dan Samson for the current UK tour takes advantage of CSC's multitracking and sound layering abilities as well as running orchestral click tracks. http://www.kenwright.com/theatre/ghost-the-musical/

Some 40 years on since its UK cinema release, Saturday Night Fever is once again brought back to life on the stage, spectuacularly reimagined in a big new music and dance extravaganza touring the UK. Following the life of Tony Manero, played by Casuatly Star Richard Winsor, Saturday Night Fever tells the story of how one man tries to escape the harsh realities of working-class Brooklyn life, emabarking on a reckless yet thrilling road to dancing success. Sound design by Dan Samson features a CSC 3.4 system in charge of the large number of click track stems and sound effects. http://www.kenwright.com/theatre/saturday-night-fever/

Three Operas in One Evening

Watching 3 operas in one evening with 2 intervals for stops at the bar may seem like a tall order but not with an evening out with the cleverly conceived Trioperas. Three classic operas are condensed back to back and staged one after another with a modern flavour to each. Turandot, Carmen and Butterfly are all given a unique twist and audiences can enjoy a translated score for the most part. Live orchestra, supported by studio based click tracks, radio mics and a large dynamic range made for challenging sound requirements. With the large number of click track stems and additional spot sound effects, a dual CSC 3.4 system was chosen to ensure a solid playback performance, benefitting from the additional players and outputs the new version offers, essential to this production. Sound design by Chris Whybrow. https://www.trioperas.com/

The Ordinary Girl from Liverpool

Adapted from the succesful ITV television series, Cilla tells the extraordinary story of the ordinary girl from Liverpool whose teenage dreams of stardom lead her to becoming one of Britain's best-loved entertainers of all time. It's an introduction by a young John Lennon to music mogul Brian Epstein that changes Priscilla White's life forever. By the age of just 25 she would be known as singer and TV Star Cilla Black, Number One selling artist and at the forefront of the Brit-Pop music scene. The musical score is the ultimate soundtrack to the 60's. A dual CSC system works with the Digico SD10 FOH to provide click tracks and sound effects to keep the hits rolling.https://www.kenwright.com/portfolio/cilla-the-musical/

Murder, greed, corruption, exploitation, adultery and treachery�all those things we hold near and dear to our hearts�� Based on real life events back in the roaring 1920s, nightclub singer Roxie Hart shoots her lover and along with cell block rival, double-murderess Velma Kelly, they fight to keep from death row with the help of smooth talking lawyer, Billy Flynn. The legendary musical is on tour again in the UK, with continued sound design input from verteran designer Rick Clarke who has been involved with the show since 1998. A CSC control system is in place keeping the Yamaha CL5 in the correct cue and as well as click track playback duties. http://chicagothemusical.com/index.php

A Million to One they said!

Returning to Londons West End for its world stage premiere is Jeff Wayne's musical version of the War of the Worlds. Amongst 3D visions of Liam Neeson as the journalist, the iconic Martian Flighting Machine, special video and audio effects, is the live orchestra conducted by Jeff Wayne himself. An intense surround aural experience, sound design is by Dan Samson and features a CSC system for control and sound effect duties as well as a dual Pro Tools systems accompanying the live on stage orchestra. .http://www.kenwright.com/microsite/war-of-the-worlds/

Rockin' Prospero back for 25 year Anniversary

Celebrating 25 years, its back off into space to visit the enchanting planet created by Prospero in this lively and fun rock 'n' roll show. Packed with feel good classics such as Young Girk, Good Vibrations, Great Balls of Fire and GLORIA, the show also boats stunning special effects and graet cast of actor musicians. On board is a dual CSC system, effectively performing sampler duties, with many special musical effects fired by MIDI keyboard from the stage, taking advantage of CSCs low latency audio playback system, as well as a Yamaha CL5 console and Flare Audio speaker system. Design by Ben Harrison.http://forbiddenplanetreturns.com/

Ever wondered what controls the big shows? How the sound effects are replayed reliably night after night to audiences all over the world? How the entire sound system is pulled together and automated at the touch of a button? Well the answer is using a Show Control System. And CSC is one such system used nightly on prestigious West End musicals and touring shows alike worldwide.

Show Control Systems are more accessible than you might think. Find out more »

Get educated and up and running with our 2 new video tutorial series:

Try it out now!